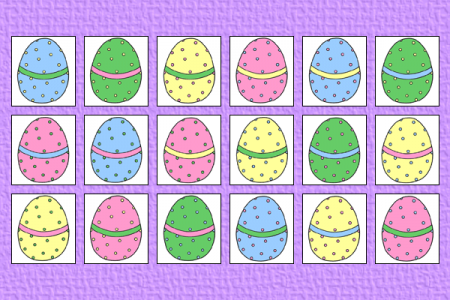 There are so many skills that can be targeted with these 18 Easter eggs including describing, comparing and contrasting, following directions, as well as asking and answering questions.  Check out all of the different games and activities you can do with them.

Since the colors of the egg, dots, and stripe are the only differences between the eggs, it makes them easy to describe.  Just pick an egg and describe the background, dot, and stripe colors (e.g., This egg is pink with green dots and a blue stripe).  Then pick another egg, do the same, and then compare and contrast them.  This is a great opportunity to introduce or review how to use a Venn Diagram.

Another describing activity involves one student describing an egg and the other students figuring out which egg it is.  To play, place all of the eggs face up on the table and have a student choose one without telling which one it is.  The student then describes the egg one characteristic at a time (e.g., “My egg has yellow dots.”).  The other students turn over the cards that don’t fit the description.  Eventually, the student’s egg will be the only one left face-up.  If your students are able to describe multiple features at once, have them give two or three clues about their egg (e.g., “My egg is yellow with pink dots and a blue stripe.”) and see if the other students can find it.

This is a great game for following directions as students listen carefully so they can figure out which egg is theirs.  Included in the printable materials are 18 descriptions for you to read to them.  They listen to the description (e.g., Your egg is yellow with blue dots and a pink stripe.) and then try to locate their egg.  You can repeat the description as necessary, but try to have the students remember the clues the first time.

Are you looking for practice sentences for /k, g/? Look no further!  These winter-themed sentences…

Picture cards are great for eliciting a sound at the word level without a model.…

Sorting Fruits and Vegetables by Where They Grow

Use this activity to help students learn where different fruits and vegetables grow (e.g., tree,…

It's "Movember," and mustaches are on the grow!  To get in on the fun, we've…

It's always nice to have some new articulation stimuli!  These "r" sounds sentence cards are…