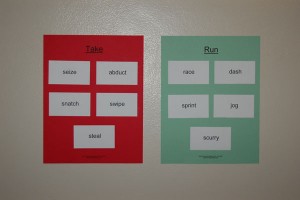 Help your students learn more about vivid verbs and the boring verbs they can replace with these 50 vivid verb cards and 10 sorting pages. An answer sheet is also included.

These pages can be used together with the vivid verb pre-test and post-test, identification and sorting worksheets, and verb replacement story. These can each also be found as part of the Vivid Verbs Mini Set.

Use this game board with students to practice S cluster words.  This board can also…

These rhyming picture cards are great for pre-readers.   They can match the pairs of…

Need some stimuli words for the /k/ sound?  Let these word lists become your helper. …

This adorable chick is out of his shell and ready to help your students! Once…

These worksheets provide practice for naming multiple meanings of words.  Included are 4 worksheets that…