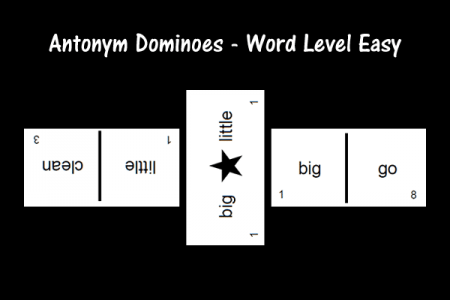 These antonym dominoes give students a lot of practice for each set of words. There are 10 easy level antonym pairs used in this game. The game rules are included below, but feel free to let your students match up pairs in a non-competitive way as well. The goal is for them to have fun while they’re matching and learning opposite words. I have included two printable files that include the word dominoes, blank dominoes for customizing, and a word list for the antonym pairs. The dominoes on each file are the same, but one set of dominoes has numbers on it for those who need help with pair matching.

As you wind down the school year or gear up for summer sessions, here is…

Tic-tac-toe games are great for therapy sessions and home practice. They can be used multiple…

Pirate Language Activity for Neither, Either, and Both

Some students with language impairments need direct, specific instruction for learning concepts such as "neither",…

Students learn the meanings for five kitchen themed phrases and then use them in sentences. …