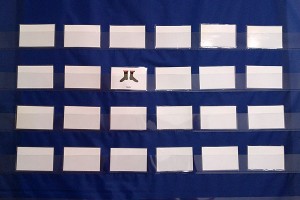 Here is a fun twist on a classic memory game that gets the students up and involved. You can play it with a pocket chart, put the cards up on a board held with magnets, or simply lay the cards out on the table. By choosing different picture or word cards and changing the number of cards used, you can alter the difficulty and the targeted goals.

This version is different because the players can only make a match with the cards that are in front of them.  (I love seeing a student’s eyes light up when another student reveals one of their cards.)  I made it harder for my middle school students by eliminating some of the words they could use in their sentences (e.g., I, people, stuff) and requiring a minimum of five words per sentence.

Note:  I used masculine pronouns to make the explanation of game play simpler.  I do realize that most caseloads include males and females, but putting “he/she” and “his/her” everywhere complicated the sentences.

Please share how you have used this idea in your therapy sessions in the comments section.

“Hang in There” with this Speech Therapy Activity!

Could it be?  Could hanging laundry actually be fun?  With this speech therapy activity it…

As you wind down the school year or gear up for summer sessions, here is…

Hands-on and flippable! These “what,” “where,” and “how” cards are a fun way for students…

These rhyming picture cards are great for pre-readers. They can match the pairs of rhyming…