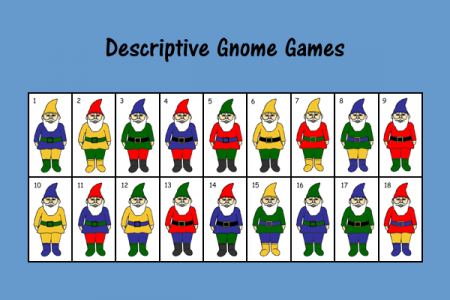 These garden gnomes will be a fun, versatile addition to your spring materials!  There are so many different skills that can be targeted with these 18 gnomes including describing, comparing and contrasting, following directions, as well as asking and answering questions. Instructions, 18 different gnomes, and 18 “Find Your Gnome” descriptions (see below) are included.

Since clothing colors are the only differences between the gnomes, it makes them easier to describe. Just pick a gnome, start at his hat, and describe his outfit all the way down to his boots (e.g., “My gnome has a red hat, blue shirt, black belt, green pants and gray boots”). Then pick another gnome, do the same, and then compare and contrast them. This is a great opportunity to introduce or review how to use a Venn Diagram.

Another describing activity involves one student describing a gnome and the other students figuring out which one it is. To play, place all of the gnomes face up on the table and have a student choose one without telling which one it is. The student then describes the gnome one characteristic at a time (e.g., “My gnome has a green hat.”). The other students turn over the cards that don’t fit the description. Eventually, the student’s gnome will be the only one left face-up. If your students are able to describe multiple features at once, have them give three clues about their gnomes (e.g., “My gnome has a gold shirt, green shoes, and gold boots.”) and see if the other students can find it.

This is a great game for following directions as students listen carefully so they can figure out which gnome is theirs. Included in the printable materials are 18 descriptions for you to read to them. They listen to the description (e.g., Your gnome has a blue hat, a green shirt, and red pants.) and then try to locate their gnome.  You can repeat the description as necessary, but try to have the students remember the clues the first time.

This game can be used as practice for asking and answering questions. Place all of the gnomes face-up on the table and secretly select an gnome.  Have all of the students except one put their heads down. Tell the chosen student the number of the secret gnome (or point to it so it can be seen by the student whose head is up). The other students then put their heads up and take turns asking questions about the secret gnome such as, “Does he have a red hat?” or “What color hat does he have?”.  The student who you told the secret to answers the question, and the questioner turns over the ones that don’t belong, such as all of the gnomes with green hats, until only the secret gnome remains.

What's a pirate's favorite letter? R! For your students working on R sounds, these might…

Get your students thinking about Christmas words with these rhyming riddles.  The target vocabulary words…

Fill In the Verb Sentences for Valentine’s Day

Verb variety is the key to this activity/game.  Students reach into a bag or bowl…

Use this hands-on activity to help your students rearrange statements into questions.  Students are able…

In an age of emails and texts, hand-written letters seem so "old school", but they…