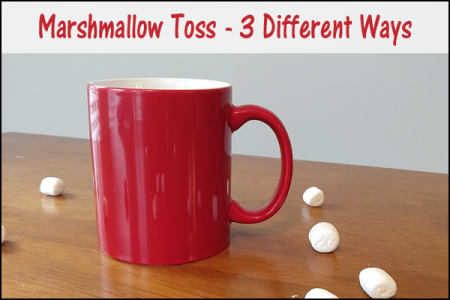 While your mugs, hot chocolate, and marshmallows are out of your cabinets for the winter, give them an extra use!  Actually the hot chocolate can take a break for a bit, but it’s bring your marshmallows to work day! (I love days like that!) Here are three different ways to make tossing marshmallows a fun activity to use as a reward for your students’ hard work.

As simple as this is, it will definitely make your students want to work hard to earn as many marshmallows as possible.  All you need is one mug and a bag of miniature marshmallows.

Set the mug on the table or floor (against a wall may be helpful) and put down something to mark where the players stand.  Each player takes a turn trying to get their marshmallows in the mug. After each player, count up the number that made it in (points) and collect your little, white, sugary motivators.

For this one, you’ll need (yep, you guessed it) three mugs and a bag of miniature marshmallows.

How to play:
The students earn marshmallows just like in One Mug Toss, but there are three mugs lined up with the mug closest to the student being worth one point, the next one is worth two points, and the mug farthest away is worth three points. It adds a bit of strategy to their game, but it also may help them get a bit lucky if they miss one mug and it goes in another.

This game is a bit different from the other two and requires some teamwork. You’ll need a mug for every team of two players and some of those tasty, white, confections that melt your S’mores chocolate (but in the tiny version). You’ll also want a bowl or bag to hold each team’s marshmallows.

How to play:
Students earn marshmallows individually or as a team of two. When it comes to tossing time, have the team members stand across from one another. One student holds the mug and the other holds the container of their earned marshmallows. When you tell them to begin, the tosser will throw a marshmallow (underhand), and the other team member will try to catch it in the mug. Once they are all done tossing their marshmallows, count how many actually made it into their mugs.

I hope you have fun with these! If you want, you can have some clean, untouched, untossed marshmallows for the students to eat at the end.

It's Dr. Seuss time! Bring the Lorax into your sessions with this easy and adorable craft!…

Who can make a peanut butter and jelly sandwich the fastest?  This game can be…

Print this one St. Patrick's Day themed game board and use it with many of…

Roll and Say for F Sound

Here are quick and easy NO-PREP pages to use in your speech therapy sessions. Simply…